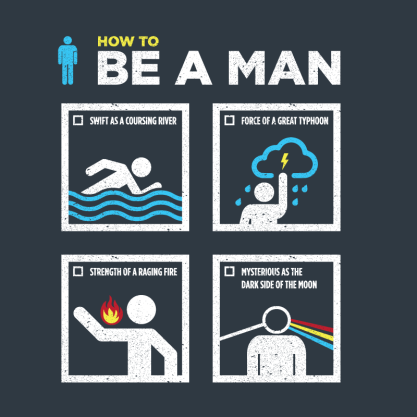 Here at ModFem (which stands for Modest Female, in case you were wondering), we’re all about encouraging and training up amazing girls to be Godly women. We pour our hearts into this conference. We cover it with prayer. We cook and clean and bake our socks off at Camp Pitt—for you! We do it all for the young ladies we love and the young ladies we have yet to meet (but we know we’ll absolutely love them, too).

So why are we taking a time out to talk about being a man?

Let’s be honest. You’ve probably already thought about that “special someone” today. If we want to be really honest, you probably stalked his Insta or checked for his Snapchats or looked for his texts before you even poured yourself a bowl of cereal this morning.

As your Titus 2 Women, WE have to find a God-honoring way to talk to you about guys and help you think about guys and figure out how to be in relationships with guys because YOU already are! Or you want to be. And we don’t want you wandering into that battle field unarmed.

Each new idea you encounter outside of Scripture that concerns boys adds a new dimension to the Prince Charming you are building in your head. If you accept what you watch on TV and in movies, what you hear about in song lyrics, or what you see on all those “teenager” memes—your Prince Charming is going to fall incredibly short of what God desires a man to be.

Because being a boy in the world today is a lot less demanding than being a man in God’s Word any day.

If you’re not sure what God wants of men, here are a few helpful hints: A Godly man has more time for the Bible than his Xbox, more interest in your soul than how short your skirt is, and a greater love for Jesus than for sleeping in.

If this very basic description of your crush or BF does not describe his behavior—he’s not a man. In fact, just like you, he’s got a long way to go before he reaches Godly adulthood.

God calls all Christians to forgive readily, to love justice, to always be truthful, to show mercy, and to walk humbly. That’s a pretty tall order for a kid who’s still in middle school or high school.

We don’t expect you at this point in your life to know any Godly men your age. That wouldn’t be reasonable. Nor do we expect you to never want to be “more than just a friend” to that special someone in your life.

But if you want him to someday be a guy worthy of being called a man, encourage him! Spur him on towards love and good deeds! Hold him accountable for any unforgiveness in his heart. Praise him when he confesses his shortcomings. Thank him for opening doors. Admire his affection for his little brothers or sisters.

One day, he will be a man. He may not be swift as a coursing river, or have the force of a great typhoon. Honestly, that sounds kind of scary any way. With time and encouragement, he will grow in Christ’s likeness—and that is the most attractive thing any guy can do.